The independent model is a rational choice to abandon old ways of working, to take on rewarding projects, and to shape one’s own career path. Consultants and organizations alike can greatly benefit from it. Find out how.

Not just about the money. In recent years, a growing number of highly-skilled professionals have abandoned traditional employment to become independent. Despite numerous opportunities and advantages, stigma against the world of independent consulting persists. Speak to any independent contractor, and chances are they will reminisce beginning their independent journey with questions about whether they had just been laid off. Is that all there is to independent consulting? Surveys show that the independent model is a conscious, rational choice to abandon old ways of working. The newly rising professional gig economy is fueled by an ambition of freedom – to take on rewarding projects, to specialise and to redefine your career path.

Greater happiness and satisfaction in self-employment

Data speaks loud and clear — going independent enriches the personal and professional lives of consultants. Enjoying greater freedom, independents feel capable of delivering better value for projects they are passionate about. Moreover, being able to determine their own schedule gives them a better shot at a healthy work-life balance.

1. Independent consultants are happier with their work-life balance

Going independent ultimately entails achieving greater career ownership and flexibility. Rather than being assigned to whatever is available at the moment, consultants are in charge of choosing their projects. 91% of the independent management consultants surveyed by Eden McCallum (Consultancy.uk, 2016) reported great satisfaction in their profession. Next to being able to pick interesting projects, independents also appreciated having control over their working hours. They reported having achieved a better work-life balance. In a similar fashion, 91% of the 430 European independent consultants surveyed by COMATCH (2017) reported feeling happier or as happy as before with their work-life balance.

Independents are actively choosing their projects, instead of being assigned to them. As such, they are more involved in and dedicated to their success. Surveys show that they appreciate and value how their disenfranchised position benefits their clients. Delivering expertise without the aid of middlemen makes for a fairer product and faster turnaround time. 91% of the consultants surveyed by EdenMcCallum (Consultancy.uk, 2016) reported delivering somewhat higher to much higher value for money compared to traditional consulting firms. Next to that, 67% of the consultants reported higher interest in their projects. 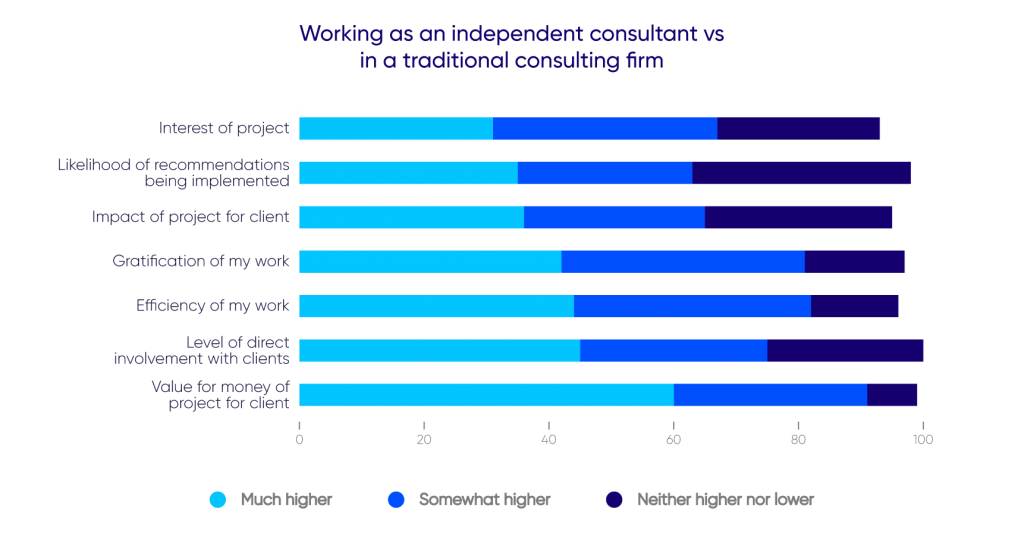 Not having to follow the rigid steps of corporate bureaucracy, independents perceived themselves to occupy a privileged position. Indeed, a study by 2ps (2016) showed that consultants considered less traditional ways of working to be more effective. Independents reported a smoother, more hassle-free project delivery compared to traditional consulting firms. Similarly, over 10% of their participants also reported that removing unnecessary intermediary structures allowed for better client communication.

Undeniably, the disruption of traditional ways of working does come with its perks. Independent specialists are being met with better financial and professional opportunities than ever before. Let’s quickly review them.

4. The demand for independent consultants is higher than ever

More and more corporations are showing interest in independent consulting, driving a higher number of opportunities and sending an encouraging signal for soon-to-be-independents. OdgersConnect (2017) surveyed 250 senior executives from companies in UK, Switzerland, Netherlands and Germany. 76% reported that their company had spent more than £5 million on consulting in the past two years. While most of their request for external help was fulfilled by traditional consulting firms, the organizations surveyed were opening up to independent consulting. More specifically, the executives appreciated the higher quality, flexibility and cost-effectiveness delivered by independents. 5. Independent consultants earn more than in their past employments

Surprisingly enough, having to unlearn a lifestyle based on monthly checks does not seem to discourage independents. If anything, the professional gig economy seems to be far more profitable than expected. 66% of the consultants surveyed by Eden McCallum (Consultancy.uk, 2016) declared that they made more or similar money compared to when they were traditionally employed.

“Being an independent was especially profitable for younger consultants. Amongst those below 40 years of age, 67% earned more than they used to at a traditional firm.”

COMATCH (2017) reports similar findings, with 58% of its sample reporting higher profits from being independent, compared to their previous occupation.

The professional gig economy is opening up attractive opportunities for consultants as well as organisations buying consulting services. Being able to determine one’s own career path and to pick projects out of real interest, independent consultants are more satisfied with their work than in traditional employment. Improved flexibility in work-life balance is only one of the many reasons. As independents, consultants also have the opportunity to bring personal commitment and value to clients, to deliver projects without unnecessary internal politics and hassle, and to be paid a fairer price for actual work done. Not only professionals but also an increasing number of companies are taking the alternative route to big consulting.

Want to read more about this topic? Here is a selection of the studies discussed in the article: